TRICK-OR-TREAT, Sun, Oct 30 from 2-4 pm: Participants should turn on a porch light please. Enjoy and have fun!

Solomon Juneau, a French Canadian, was born at L'Asumption, a small village near Montreal Canada on August 9, 1793. A  French trader, Juneau was named an authorized agent when the American Fur Company established a Trading Post in  Milwaukee in 1818. He soon saw a future in Milwaukee and purchased the land between the Milwaukee River and Lake  Michigan, platted it, and named it Juneau Town. He became the first postmaster and the first presidet of the Village of  Milwaukee and in 1846 was elected the first mayor of the City of Milwaukee.

During his many trips between Milwaukee and Green Bay as a buyer for the American Fur Company, he was attracted to  an Indian camping ground located on the east branch of the Rock River which was to become our village. Juneau established a  Trading Post here in 1833 naming it Theresa in honor of his mother. In 1820 he married the granddaughter of Menomonee  Indian Chief Ah-ke-ne-po-way and the couple had seventeen children, three dying in  early youth.

In 1847 he built this home, and it was used as a summer home until 1852 when he moved his family here from    Milwaukee. Juneau had platted the village south of the Rock River in 1848, and was engaged in many business pursuits here.    He had purchased the water rights and built a dam earlier to provide water power for his saw and grist mills. He also operated  a general merchandise store and kept trading furs with the Indians. 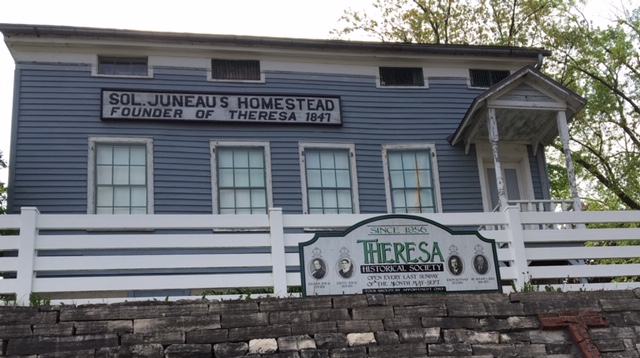 Juneau's retirement to Theresa was short-lived however, as his wife died in 1855 and he died a year later while making an Indian payment for the U.S. Government at the reservation at Keshena.

Some 700 Indians including Chiefs Oshkosh, Corrow, Larriet, and Keshena marched with his funeral bier to the burial grounds at the Keshena reservation. Later the body was returned to Milwaukee and buried at Calvary Cemetary.

The last home of Solomon Juneau was saved as a historical shrine by Joseph Gottwald, a forward looking Theresa resident, who purchased it in 1932 when it was to be torn down, and later sold it to the village who moved it to the present site. The house stands some 200 feet from its original location and has the original clapboard siding. The windows have not been altered and the hand-carved spindles in the railing in the upstairs hall are as they were when the house was built in 1847.

There are a few of the original furnishings of the Solomon Juneau family left. The black stove in the parlor was used to heat the house. The large double doors of his Trading Post which was located at what is now 105 South Milwaukee Street, stand in the upstairs display room, along with an ingenious mouse trap bearing the inscription "S.J. 1814."

The portraits of the rugged Juneau and his wife in the parlor are gifts of Mrs. C.W. Lamoreaux and B.J. Husting, grand-children of Solomon Juneau.

The rest of the display items have been contributions of many people of the area who have been interested in this museum to Juneau.

The home has been restored by the Theresa Historical Society, which was organized in 1956.

A bronze marker dedicating the Solomon Juneau Home was erected by the Dodge County Federation of Women's Clubs on May 21, 1938.

It was unveiled by Miss Nancy Wachman of Milwaukee, a great-great-granddaughter of Juneau. Mr. Berthold Juneau Husting of Mayville, a grandson and U.S. District Attorney gave the address. The Theresa Village Band under the direction of A.L. Pitzschler rendered several selections and the school children, directed by their teacher Miss Camilla Weber, sang "America The Beautiful."

The Juneau Home was also named the Dodge County Bicentennial Home during the celebration in 1976.

The home is open to the public on Memorial Day and every last Sunday of the month from Memorial Day through September.