January and February Updates: Theresa Water and Sewer Utiliy Bills Notices were sent to all account holders who had not paid by the January 20 due date. These accounts are scheduled for disconnection if still unpaid by January 30, 2023. If payment arrangements are needed, please call 920-488-5421 or email [email protected] Tax Bill Deadline The full payment or first installment is due by January 31, 2023. Payment can be sent to the Village of Theresa, PO Box 327, Theresa, WI 53091, put into the drop box at the parking lot exit of Theresa Village Hall (292 Mayville St), or paid to the Clerk-Treasurer Monday-Thursday from 8am-4pm.  Dog Registrations Registraton informaton is due to the Clerk-Treasurer no later than March 31 to avoid a $25 late fee. The fee for spayed or neutered dogs is $10, unaltered dogs $15. Pet License Application Form Elections The Spring Primary Election is February 21 and the Spring Election is April 4. The polling location for Village residents is at Theresa Village Hall, 292 Mayville Street and the polls are open from 7am-8pm. For information regarding Voter Registration or to request and Absentee Ballot go to: https://myvote.wi.gov/. In-person absentee voting is by appointment only, 920-488-5421.

This early history is taken from the minute book of the Township of Theresa of 1948, which is on display in the Juneau Home, and is on loan to the Theresa Historical Society. The Village of Theresa south of the Rock River already had been platted by Solomon Juneau at this time.

The first state election was held on April 3rd, 1848 and Nelson Dewey received 58 votes for governor. At the first county election held Nov. 7, 1849, 92 votes were cast.

At the first annual town meeting on April 3rd, 1849, the board of supervisors recommended to raise by taxation $250 for contingent purposes and $900 to defray expenses for the year 1848. It was also decided to raise for school purposes one-quarter of one percent of the valuation of the township.

On December 20, 1863 a special meeting was called to raise money to be paid as bounty to men being drafted to serve in the Civil War. The clerk's record on Nov. 5, 1864 gave the names of 69 volunteers and draftees from the township who were to receive the $200 bounty.

On October 28, 1895 the Theresa Fire Company #1 was organized and at the annual meeting on November 22, 1895 F.W. Bandlow was elected as president and Fred Jung as fire chief. Nick Husting's barn was rented to house the used equipment consisting of a hook and ladder wagon, a hand pumper, and hose and cart. The churches were instructed to ring the bells in case of fire until their own bell could be purchased. The first fire call was on Feb. 11, 1896 at the Herman Budahn farm (now Andy Schnitzler).

On May 4, 1901 a fire which started at the Bandlow Brewery almost wiped out the town until it was brought under control with help from Mayville and Lomira. Completely destroyed were 8 buildings including the two story brick Catholic school and the fire house next to it.

In 1898 the village was incorporated to the displeasure of the township and the hard feelings lingered for some time.

In 1900 a new village hall was built with room for the fire company to store their equipment. The building has a bell tower which was used to dry fire hoses and jail facilities to lock up the unruly in the village. The present firehouse was added on to the village hall in 1963. 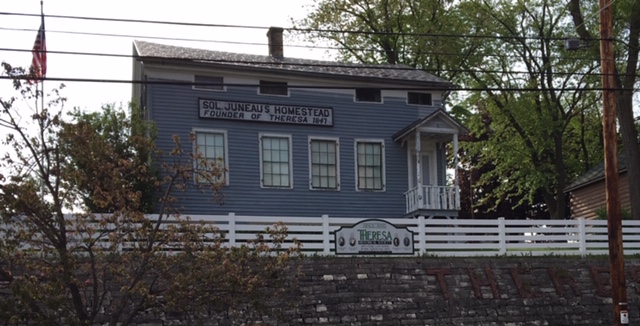 Among the early prominant citizens were the following:

Christopher Bannister was elected a town supervisor at the first election in 1848. He held many civic offices and was appointed the first postmaster in Theresa on July 6, 1846.

Francis Dodge Juneau (son of Solomon), settled in Theresa in 1849 and was employed by the U.S. Government as an Indian interpreter. He also served as town treasurer, besides being a tin smith by trade.

Dr. Valentine Miller settled in Theresa in 1849. He was town clerk for 25 years and was the oldest practicing physician in Dodge County in 1880.

Jacob Bodden came to Town Theresa in 1851 and was active in civic affairs. He was a member of the state legislature from 1861-1874 and also served as treasurer, sheriff, and was chairman of the county board of supervisors of Dodge County in 1874-75.

Benidict Weber came to Theresa in 1853 and purchased the brewery from Ulrich Oberly, who had founded in in 1849. It stayed in the Weber family until it ended operations in 1961.

Peter Langenfeld served as justice of peace, postmaster, and was a member of the state legislature in 1878. His son Dr. Peter F. was a physician in Theresa from 1903 until 1960, and his grandson Dr. Gregory has practiced in Theresa from 1942 until November 1992.